Why is it believed that Lakshmi lives in Ahmedabad? Find out with ESTHER DAVID 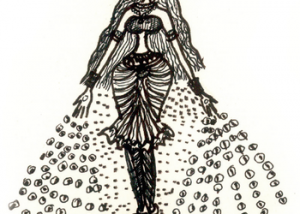 It is believed that Goddess Lakshmi lives in Ahmedabad and on Deepavali night,we wait for her, making beautiful rangolis, light clay lamps and welcome her.To mark this story, an eternal light is kept burning for her in an alcove of Teen Darwaza of the old city of Ahmedabad. There are many stories about the presence of Lakshmi in Ahmedabad. It is said, late one night, when the goddess stood at the entrance of the city, the guard allowed her to enter, left her there, locked the door from inside and went to take permission from the Sultan. He was beheaded for leaving the goddess standing alone at the gate.Then, the Sultan rushed to welcome her,but by then she had disappeared into the city. Another version is that the Sultan deliberately beheaded the guard so that Lakshmi could not leave the city.And, according to the third version, the goddess of wealth was already in the city; she wanted to leave and requested the guard to open the doors, but he did not; because, if she left,Ahmedabad would lose its prosperity. Since then, an eternal light burns in an alcove at the central arch of Three Gates, better known as Teen Darwaza.

For years, we saw Jabbar Mirza light a lamp here. It is said he belonged to the family of caretakers of the lamp.Today, he is no more, so instead of him, his wife looks after the lamp. There is yet another story attributed to Lakshmi, as Bhadra Fort is right opposite Teen Darwaza, which has the hand of Lakshmi. Women of most communities offer to it sindoor, lotus flowers and incense sticks.A straight road from here leads to her alcove where the eternal light burns for the devout.

Her hand is carved in low relief on the right-hand-side of the of the Fort gateway. It is above eye level and one can assume that she must be tall,but her palms were small like a young girl’s. But the length of her hand from wrist to elbow is that of an older woman.The level of the hand indicates that she may have been standing at this gate, resting her hand on the pillar, before entering the city. The ritual of lighting a lamp for Goddess Lakshmi is being practised for ages. It is interesting to note that it has become a form of worship to walk from Bhadra Fort to her alcove at Teen Darwaza. So, maybe, there is yet another story to Lakshmi’s arrival in Ahmedabad, as most commercial houses, even if they have larger establishments in the western side of the city, still function from small shops in the walled city because of a popular belief that Lakshmi, the Goddess of Prosperity, resides in the old city.