It was just by chance that I discovered the Chandi-Temple, a few kilometers from Chandigarh; in a tree-lined forest; full of birds. I had not expected that the name of this very modern city designed by famed Swiss architect could be connected with the Mother Goddess. According to the plaque affixed there, it is said that after the Goddess had defeated the demon, she had stopped in the vicinity, where the temple stands now and was spotted by a ‘Rishi,’ who made a small temple for her. Later, it is said, a local ruler made a walled city nearby, with a fortress meaning ‘Gadh.’

After India became independent, it was decided that Le Corbusier would build Chandigarh.

Excavations in this area have revealed that objects from the Indus Valley civilization have been found and exhibited at Le Corbusier Center in Chandigarh.

Last month, while I was at IIT Ropar also known as Roop-Nagar to give a lecture, I discovered another Indus Valley site there, which has a very well maintained small museum.  On the way back, I saw a narrow gauge station, from where a tiny train can take tourists to Simla, passing through winding hills, tunnels and forests. This charming railway station reminds one of a Bimal Roy film-set, like the one in Bandini. 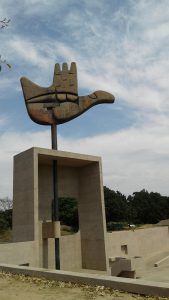 When, I was there, preparations for Baisakhi were under way, so I decided to spend my evenings at the Tagore Auditorium with its brick and glass façade, where I saw Bhangra,  heard vocal and instrumental music with other dance forms.

This lush green, well planned city of gardens and manicured trees also has a National Museum, which houses an amazing collection of miniature paintings, sculptures and a few pieces of modern Indian art.

While I was in Chandigarh, Le Corbusier Center and Chandigarh Lalit Kala Akademy inaugurated the “Open Hand – Art Studios,” to commemorate Corbusier’s cousin’s Pierre Jeanneret 122nd anniversary, as he was architect, designer  and close associate of Le Corbusier on many projects. His chairs are on display at the center. The air was festive, as installations were displayed on the lawns, like a painted auto-rickshaw and many more. So, I went to see

usier’s; “Open Hand Sculpture,” which can also looks like a bird.

It is a mobile and according to the wind direction moves slowly in all directions, standing amidst mango trees, as the fruit was just beginning to ripen, the most tantalizing moment was at sunset, the golden orb of the sun, could be seen suspended on the horizon from the tall rectangular pedestal of the Open Hand.

On the way back, I stopped at a sector known for its “Phulkari” shops and saw a Corbusier bus-stand. I marveled the use of verticals and horizontals, which are a beautiful mix of art and geometry.

Right then, a bright magenta-pink car overtook my cab, I noticed it was painted in floral designs all over. A young woman was in the driver’s seat and on her car door, there was a yellow signage, “CAUTION-WOMAN DRIVING.”