They say; Assam’s river Brahmaputra is one of the longest rivers’ in India and known to be one of the few male rivers, as most Indian rivers have feminine names. On landing at Guwahati airport, one could feel the whiff of fresh air and, while driving to the hotel, we saw colourful houses with sloping roofs on hillocks, as some women and school girls could be seen on the winding streets; dressed in the Assamese two-sari ‘Mekhla.’ Reaching the hotel, from the large glass window in my room, I could see the river flowing bank to bank, almost resembling a sea dotted with boats. One can take rides on barges from the many jetties and remember scenes from Satyajit Ray films, set against hills, mist, a light rainfall and beautiful landscapes. From here, it is important to see the Kamakhya Temple. It is said, when Lord Shiva was in a fury, he salvaged the body parts of Sati, his wife, who had immolated herself. He threw these all over India. And, it so happened that her pubic or ‘Yoni’ fell; where the temple stands. So, in a way, the temple resembles a womb or ‘Garbh-Griha.’ The temple winds downwards, like an inverted well. The temple is on a hill top, which can be reached by driving through winding roads, which have stalls, from where women buy bamboo articles, ritualistic offerings, along with red and white bangles. 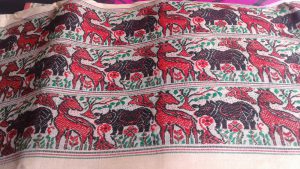 We were in Guwahati for a literary event, where we were greeted with ‘Gamchas,’ white stoles woven with red designs, as a mark of respect, these were draped around our shoulders. Everywhere, there were conical ceremonial objects in metal, accompanied with statues of Rhinoceros. So, we made a quick trip to the Zoo, where we took a buggy-ride and saw Indian and African Rhinoceros, Thamin Deer, a white Tiger, Gibbons, massive Assamese Bisons known as Mithun and innumerable birds. Back at the conference, we had a taste of Assam with chicken curry, brown rice, parval cooked in a light sauce, crispy fried karelas, Rosogollas and red-Assam-tea. In the market place, we saw bamboo hats, brown poha or flaked rice, fresh vegetables and mounds of gourds; amidst Momo-stands. But, I could not take my eyes off, a fabric shop, where a sari border was woven with designs of Rhino and Deer.

At that very moment, I understood how art, life and nature can be woven together by an imaginative artisan.